You’ve probably heard of Moore’s Law, the observation that semiconductors would get meaningfully faster and cheaper over time, improving computing power. But what about Flatley’s Law and Wright’s Law?
None of these observations of technological progress exactly qualifies as an immutable law of nature, like Newton’s theory of gravity, but they have helped pave the way for some of the most compelling advances of the last 50 years. And in doing so they have helped improve the lives of consumers and drive long-term opportunity for savvy companies and investors.

1. Moore’s Law and the proliferation of semiconductors
Intel co-founder Gordon Moore, while working as a researcher in the 1960s, somewhat famously observed that the number of transistors that fit onto an integrated circuit doubled roughly every 18 months to two years, effectively providing more processing power at the same cost. He further observed that there was no reason that progress couldn’t continue.

This was not exactly a law of science, like Newton’s gravitational law, but rather an aspirational one, providing engineers with a goal. “It’s really a matter of how much money you invest in R&D to try to reduce the transistor size,” notes equity investment analyst Isaac Sudit, who has been covering semiconductors for more than two decades and met Gordon Moore as a young analyst. “Now companies invest for a reason — to get a return on their investment. It turns out that industry economics evolved in such a way that enough profits were generated to maintain that pace of innovation. So, it became a self-fulfilling prophecy.” 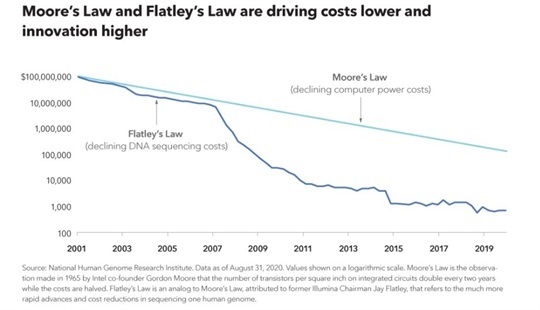 This pace of progress helped fuel the personal computing revolution in the 1980s and 1990s and paved the way for mobile phones, self-driving cars and health care devices.

As semiconductors become cheaper and more efficient, they will penetrate more aspects of our daily lives. By and large, they will continue to drive improvements in things we already use, like phones and tablets, cars, entertainment systems and appliances. “The costs are dropping to the extent that we can start creating new business models that allow companies to generate money, and that's what we're seeing,” Sudit adds. 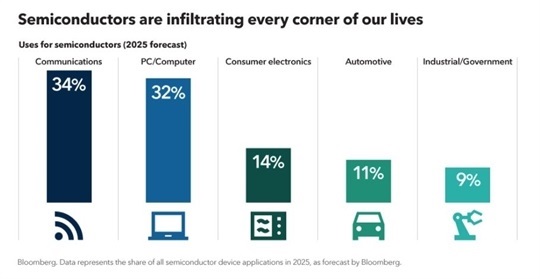 Two other dramatic advances have changed the landscape of the semiconductor industry: cloud computing and artificial intelligence. “Storing data in the cloud has transformed computing from a cost center to a profit center. Servers are now rented from companies like Amazon or Microsoft, which has further allowed for the creation of new business models,” Sudit says. In the case of artificial intelligence, virtual assistants like Alexa and Siri, and smart thermostats like Google’s Nest are already in use by consumers. “The poster child for advances in artificial intelligence, of course, is the self-driving car.”

So what does all of this mean for investors? The expanding use of semiconductors clearly is a bullish sign for the industry over the long-term.

“The semiconductor industry is still relatively young — about 60 years old — so I had the chance to meet most of the founders who drove the initial phase of hypergrowth,” says Sudit, who has a PhD in physics and worked as a scientist in both academia and in the industry before becoming an investment analyst. “But I have also gotten to know the next generation of leaders, many of whom were outsiders with strong business skills.”

Does Sudit’s background in physics provide him with a unique perspective as a professional investor? “Yes, but not for the reasons you might think,” he explains. “What the PhD in physics allows me to do is to push company leaders to talk about their business strategy, their balance sheet and their debt — because I already understand the technology.”

2. Flatley’s Law and the power of gene sequencing

When the human genome was first sequenced about two decades ago, it took a team of researchers nearly eight years at a cost of more than US$100 million. It soon became clear that machines used for genetic sequencing would need to be faster and cheaper.

Enter Jay Flatley, former chairman of medical technology company Illumina. He set his company not on a mission to discover some new innovation, but to maintain a laser focus on execution. Today, thanks to improvements driven largely by Flatley, who is not a scientist himself, a human genome can be sequenced in about a day for around US$1,000. Flatley’s Law, an analog to Moore’s, exemplified even quicker advances and greater cost reductions.

“For a brief moment we believed we had all the pieces to the genetic code to solve every disease,” recalls equity portfolio manager Richmond Wolf, who got to know Flatley while covering US medical technology companies as an investment analyst. “It turned out to be more complicated than that, but it was an important first step.”

Subsequent breakthroughs in DNA analysis have led to a new era in medicine. ”Today we can compare the map of the human genome to mutations that exist as a function of cancer,” Wolf says. “We can then identify specific mutations and match therapies to them.” Indeed, testing and therapies derived from genetic testing have the potential to extend lives and generate billions of dollars in revenue for the companies that develop them.

We are developing tools that are rapidly advancing the pace of drug development. “Exciting new modalities like gene therapies, immunotherapies and cell-based therapies that are now changing the trajectory of many cancers could not happen without DNA sequencing,” says Wolf. “Very often the companies that develop and supply the picks and shovels to an industry can make powerful investments. If it were not for DNA sequencing many of these new therapies would not be possible. Just as in the case of semiconductors, if it were not for advances in extreme ultraviolet lithography, Moore’s Law might have broken down years ago.” 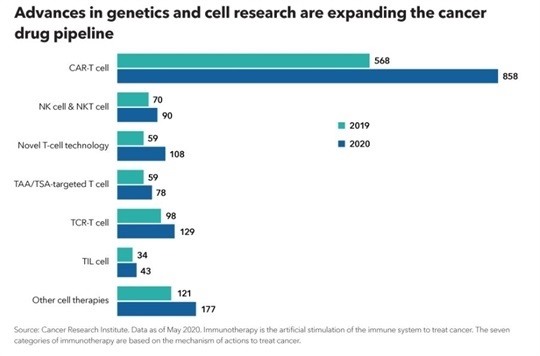 Breakthroughs in diagnostics may lead to much earlier detection of illnesses, or in some cases treat disease before it progresses. “One of the most exciting things in health care today is something known as liquid biopsy, which uses a sample of your blood to identify tumors at their earliest stages when they are shedding a tiny amount of mutated DNA,” Wolf says.

More recently genomic research has been a key contributor in the fight against COVID. Not only has DNA sequencing identified and tracked variants, but US biotech company Moderna was able to get a jump on developing its vaccine because a scientist had published the genetic code for the virus.

Quick, accurate and cheap gene sequencing has the potential to put medical researchers on a path to developing personalized therapies for patients. “There’s never been a more exciting time in health care,” Wolf adds. “It started with the sequencing of the human genome. We've developed and improved these tools over the last two decades, and now we’re using them not only to provide more accurate diagnostics, but to actually develop better therapies and to match therapies to those diagnostics.”

3. Wright’s Law and the coming dominance of electric vehicles

A third law related to declining production costs, Wright’s Law, predates Moore’s by a few decades and has broader application. Theodore Wright, an aeronautical engineer, observed in 1936 that when the production of airplanes doubled, costs declined by a fixed rate.

Taking Wright’s observation and applying it to advances in lithium-ion batteries, those most commonly used in electric cars, suggests prices should drop significantly for every doubling of production.

Today electric vehicles (EVs) typically run on a 40-60 kilowatt lithium-ion battery pack, which accounts for about a third of the vehicle cost. Electric cars become cheaper than conventional cars when the battery cost drops under US$100 per kilowatt hour (kWh). Over the last decade, the average price has fallen from US$917 per kWh to about US$137, according to a Bloomberg analysis. In China, battery costs for some vehicles have already reached the US$100 threshold, years ahead of previous estimates, according to some reports. And that number is likely to fall below US$60 by 2030.

As a result, EV makers have recently been introducing models with lower prices, better performance and longer range. Typically, EV batteries can run 200 to 400 miles before they require recharging. Companies leading the race for cheaper, more efficient batteries include CATL in China, LG Chem and Samsung SDI in Korea, and Tesla in the US. 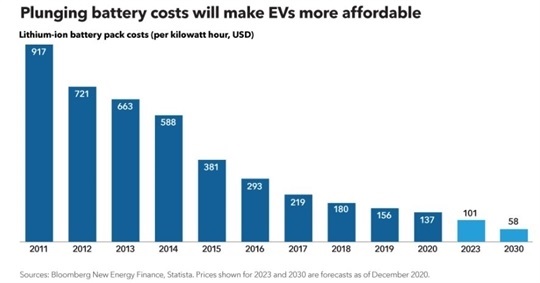 The International Energy Agency expects global EV sales to rise 28% a year over the next decade. But with emissions standards tightening worldwide and costs becoming increasingly attractive to consumers, those estimates may be too conservative, says equity investment analyst Kaitlyn Murphy.

“New developments will potentially make EVs cost competitive not only with new gas-burning cars but with the entire fleet of cars on the road, including used cars,” says Murphy, whose covers US automobile and components makers. “That’s about 270 or 280 million vehicles in the US If you take a long-term view, that suggests there could be much stronger growth than the market expects.”

Indeed, the emergence of battery-powered cars is changing the economics of the global auto industry. As companies build out their EV fleets, they are also building a base of potential service revenues — from managing your battery to providing updatable software that can improve consumer experience as well as car safety.

“Whether they are legacy automakers or startups, companies that embrace structural change and introduce these advancements quickly have a better chance of winning over the long term,” Murphy adds.

Furthermore, broader adoption of lithium-ion batteries in autos could trigger price reductions that ultimately make the batteries affordable for other uses, like energy storage for public utilities, for example.

Moore’s Law, Flatley’s Law and Wright’s Law should continue to push the pace of innovation across industries and help smart companies take advantage of new opportunities. The sheer speed of change means investors must remain alert as to which companies will be disruptors and which will be disrupted.