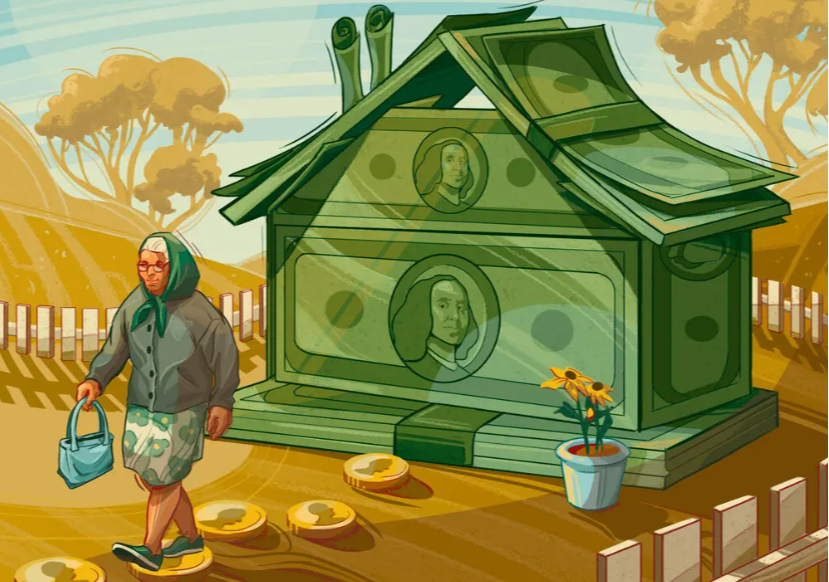 Reverse Mortgages Are No Longer Just for Homeowners Short on Cash

Turning your home equity into cash can help pay bills and preserve other savings and investments. But they’re complicated, and not for everyone.

After her husband died suddenly from a fall in 2016, Marjorie Fox decided to hold off on any big decisions. She waited two years to retire as a financial planner and three to sell their house and buy a lakeside townhome in Reston, Va. For added protection, she took out a reverse mortgage on her new home.

Ms. Fox, 75, had set aside $150,000 in a cash reserve, and the reverse mortgage was another backup. If something unexpected did happen, “it could be when the stock market is down and it could be an inopportune time to sell assets,” she said. Reverse mortgage borrowers can take the money as a lump sum, as fixed monthly payments or as a line of credit. Ms. Fox chose a line of credit, which she could tap as needed.

Within a year, her cash reserve was depleted, and Ms. Fox began pulling money from her reverse mortgage. Among her expenses: $50,000 on emergency dental work and a down payment to reserve a spot in a retirement community set to open in 2025. Untapped money in the line of credit earns interest.

Until recently, it was conventional wisdom that a reverse mortgage was a last-resort option for the oldest homeowners who desperately needed cash. But a growing number of researchers say these loans could be a good option for people earlier in their retirement like Ms. Fox who are not needy at all.

Homeowners in their 60s and early 70s could use cash from a reverse mortgage to protect investment portfolios during market downturns, to delay claiming Social Security benefits or to pay large medical bills.

“The best use of this tool is to provide and supplement income during retirement,” said Craig Lemoine, the director of the financial planning program at the University of Illinois, Urbana-Champaign. “A younger retiree can stay in the house while turning equity into an income stream.” Dr. Lemoine is also executive director of the Academy for Home Equity in Financial Planning, a group of financial and housing experts.

With a reverse mortgage, homeowners 62 and older can borrow against the value of their home. The loan and the interest on the money that was taken out come due when the last surviving borrower or eligible nonborrowing spouse dies, sells the house or leaves for more than 12 months, perhaps to enter an assisted living facility.

When you apply for a reverse mortgage, you’re required to take the maximum amount you are eligible for, but the money you do not use immediately — say, the untapped portion of a line of credit — sits in a special account earning interest. Only the money actually pulled from the account is charged interest, and that is known as the loan balance.

Most reverse mortgages are Home Equity Conversion Mortgages, known as HECMs, which are insured by the Federal Housing Administration. The loan is “nonrecourse,” meaning the F.H.A. guarantees that a borrower will never owe more than the value of the property when the loan is repaid.

In exchange for that guarantee, borrowers pay an initial mortgage insurance premium to the F.H.A. that is based on the home’s appraised value and could run up to $19,400. An origination fee to the lender could top out at $6,000, and the lender charges closing fees typical for any mortgage loan. These upfront costs can be paid with cash from other sources or with proceeds from the reverse mortgage and repaid later with interest.

“Because of the fees, we generally say that if you don’t think you will be in the house for five years, a reverse mortgage may not be something you want to do,” said Shelley Giordano, an executive at Mutual of Omaha Mortgage who advises loan officers and financial planners on using home equity in retirement planning.

You can get an idea of how much a HECM (pronounced HECK-um) will pay by using the calculator at RetirementResearcher.com, which is run by Wade Pfau, co-director of the American College Center for Retirement Income in King of Prussia, Pa.

Say you are 65 and your house is worth $1 million. Assuming about $26,000 in upfront costs rolled into the mortgage, you would be eligible for roughly $420,000 in credit. That could sit in a line of credit until you need it. Alternatively, you could set up monthly “tenure” payments of $2,130 from the line of credit for as long as you remain in the house, or monthly “term” payments for a fixed time (perhaps $2,780 for 20 years). The unused credit balance — perhaps the money that will eventually go to monthly payments — in the line of credit grows at the same variable interest rate as the interest charged on any loan balance.

Putting a Reverse Mortgage to Use

Ms. Fox said her reverse mortgage was one part of an overall financial plan. She lives on required minimum distributions from her individual retirement account as well as income from maturing bonds in a taxable account, Social Security, and a survivor benefit from her husband David’s corporate pension.

If she needed extra cash, Ms. Fox said she would rather take tax-free funds from her reverse mortgage than pay income tax on additional withdrawals from her I.R.A. or capital gains tax on stock sales in her taxable account.

The HECM also will provide flexibility when she must pay the entrance fee to the continuing care retirement community she plans to move into in several years. She could use the proceeds from the sale of a home she co-owns in California, along with the HECM money. She could sell the townhome when market conditions are right and pay off the loan balance then.

“I want the ability to move without having to depend on the immediate sale of the townhome,” she said. “It stresses me out when I think of it.”

Taking withdrawals from investment accounts during market downturns, especially early in retirement, can wreak havoc on the longevity of a portfolio. Instead of locking in losses, a retiree who uses a “coordinated strategy” could cover expenses and protect savings by pulling funds from a reverse mortgage when markets drop, according to several studies.

“When a portfolio is down, taking something from it drives it further down and makes it much harder to come back,” said Barry Sacks, a pension lawyer who conductedstudies that showed using a reverse mortgage during market downturns could help portfolios stay on track.

This strategy works best for retired homeowners with investment portfolios of $500,000 to $1.5 million, said Mr. Sacks, who has a reverse mortgage on one of his two homes in Northern California.

In a December 2021 study, Mr. Sacks and co-researchers found that in various scenarios, retirees who used a coordinated strategy were the least likely to run out of money over 30 years. That compared with a considerably higher risk of “cash flow exhaustion” for retirees with similar wealth who never used a reverse mortgage or who opened one after depleting their investments.

To use this strategy, Mr. Sacks said, retirees should look in January at how their portfolio compares with a year earlier. If it has shrunk because the investments declined, they should pull cash for the coming year’s expenses from their reverse mortgage and enable the investments to recover.

Parents who want to preserve home equity for their children could potentially leave an even larger legacy with a coordinated strategy, said Dr. Pfau, author of “Reverse Mortgages: How to Use Reverse Mortgages to Secure Your Retirement.”

Using historical data, Dr. Pfau found that if the couple took out a reverse mortgage after depleting their portfolio would have left their heirs nearly $1.8 million in tax-free home equity.

If they used the coordinated strategy, they depleted the home equity but left $2.2 million in after-tax assets in the portfolio.

“To the extent that people are worried about legacy, they should not be worried about the distinction” between investments and home value, Dr. Pfau said.

For those with lower savings, a growing line of credit could finance other goals, such as paying for home health care later in life, Dr. Pfau said. “If I open the line of credit sooner and let it grow, I will have more borrowing capacity,” he said.

Dr. Pfau also said early retirees could use a HECM as a “bridge” to delay claiming Social Security until age 70. Beneficiaries who wait until 70 get 77 percent more in lifetime monthly benefits than someone who collects at 62.

To use the bridge strategy, you would take out the loan at 62 and use it in place of all or some of the Social Security benefits for eight years. Over a long retirement, Dr. Pfau found, a retired couple who used a bridge strategy were more likely to preserve net worth than if they claimed early and opened a reverse mortgage after depleting savings.

One reason is the lifetime of larger monthly benefits, he said, and another is the ability of the portfolio to grow because the retiree is not taking withdrawals for expenses.

In recent years, the federal government has tightened the rules on the loans, including by limiting how much a borrower can get the first year and by ensuring that a nonborrowing spouse can remain in the home after the borrower dies.

Still, prospective borrowers should be mindful of the downsides. Though a homeowner may set out to use loan carefully — perhaps as monthly annuity-like payments — it could be tempting to spend on unnecessary expenses, depleting home equity long before death.

“There is always a danger with an influx of sudden, flexible cash,” Dr. Lemoine said. He also said a reverse mortgage may be a poor decision for someone who is unable to maintain the house and who would be better off downsizing or moving into a care setting. And prospective borrowers should assess possible future health needs, experts say; a large loan balance could leave borrowers without enough equity if they ever need to sell their home and pay for nursing-home or assisted-living care.

Dr. Lemoine suggested that prospective borrowers interview several lenders before making a choice. Lenders “can negotiate on some closing costs,” he said. All borrowers must sit through government-mandated counseling sessions. A financial adviser could — and probably should — help someone decide if a reverse mortgage fits into an overall retirement plan, he said.

For some older people who still carry a regular mortgage, a HECM may be a way to improve cash flow. About five years ago, Elizabeth Kirkaldie, 76, a real estate broker in Napa, Calif., took out a $300,000 reverse mortgage on her home, using $250,000 to pay off the traditional mortgage she still carried on the house while leaving $50,000 in a line of credit.

The enabled Ms. Kirkaldie to free up $2,200 a month that she had been paying on mortgage expenses. The rest of her income comes from Social Security, investment property and sales commissions.

“As an independent contractor, my income is erratic,” Ms. Kirkaldie said. “The reverse mortgage has given me some stability.”

Despite the compounded interest she will owe on her loan, Ms. Kirkaldie likes the idea that her line of credit has grown, to $70,000.

“It’s a great way to save,” she said. “The line of credit is growing at a higher interest rate than I could get anywhere else.”

As for her three children, she said they are doing well financially and would not be concerned if they do not inherit substantial home equity. “My children want me comfortable,” she said.