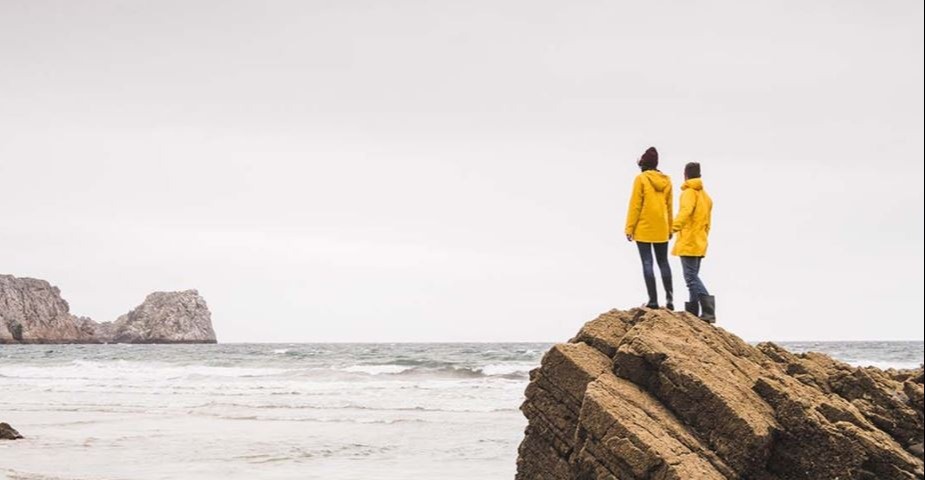 Is there opportunity in this stock market volatility?

Fears of persistent inflation and tightening monetary policy have rocked markets since the start of the year. More richly valued sectors like technology suffered the initial brunt of the sell-off as their valuations came under close scrutiny with the expectation of higher interest rates. The volatility spread to blue chip stocks with the Standard & Poor’s 500 Composite Index briefly entering correction territory on Monday before whipsawing back. On Wednesday, markets gyrated again before closing nearly flat as the Federal Reserve hinted it may move more quickly than previously expected to hike rates and shrink its balance sheet.

Renewed geopolitical tensions, ranging from the Russia/Ukraine border crisis to U.S.-China relations, are also fueling market uncertainty and are likely to keep some pressure on asset prices in the months ahead. While volatility is likely to persist, several of our investment professionals believe markets are healthier than many people realize.

Below are some of their views on how the market correction and Fed policy changes may provide an opportunity to adjust portfolios, taking selective action where they have long-term convictions to position portfolios for the next three to five years.

How returns have differed

Netflix was among the hardest hit last week when its share price fell 22% on January 21 after reporting lower-than-expected subscriber growth. This triggered deeper concerns that even industry giants would not be spared from eroding demand, tougher competition and potentially deteriorating earnings. Within the technology sector, recent price action indicates investor preference for high-quality, low price-to-earnings (P/E) companies over the higher valued companies which tend to be more sensitive to rising rates.

But volatility in the share prices of emergent companies is to be expected. Over the past 15 years, some fast-growing companies have experienced multiple corrections in share price. Those investors who weathered the market turbulence and remained invested would have realized attractive returns however.

Sources: Capital Group, Morningstar Direct. As of December 31, 2021. Corrections defined by share price decline of 10% or greater. Based on daily returns from 2007 to 2021.

In short, earnings matter. History has shown that certain high multiple companies can continue to appreciate should fundamentals exceed expectations over time. This is especially true for select growth companies with large and expanding total addressable markets with potentially long revenue and earnings growth runways.

The Fed may accelerate tightening despite volatility spikes

Today's news from the Fed was a bit more hawkish than the market anticipated but it doesn't change our outlook for the year. We continue to expect at least four (25 basis point) rate hikes and think inflation is likely to persist well above the Fed’s target this year. We have been thinking that a faster pace of rate hikes can’t be ruled out, and Powell’s comments at the press conference confirmed this.

The last time the Fed hiked, it did so in 25 basis point increments each quarter. That is still probably its most likely course of action this time, but given how far above target inflation is, there's no reason why the Fed would want to limit its ability to hike faster if it needs to. In his comments to the press, Powell did not dismiss the possibility that the Fed would speed up tightening or rule out the possibility of raising rates in 50 basis point increments.

Investors could be in for a turbulent ride over the next few quarters. It may not take many rate hikes or much quantitative tightening to spur more equity market volatility. But the view of Capital Group's rates team is that the Federal Reserve is not likely to let the stock market throw it off the path of tightening, like it did in the last hiking cycle. If you go back to 2017 and 2018, when the Fed hiked 175 basis points, it had space to reverse course when asset prices plunged because inflation was below target. Today that is not the case.

This would present a tricky dilemma for the central bank. It would be hard for the Fed to claim to be credible about achieving its dual mandate (of promoting price stability and full employment) if it backs off of its tightening schedule before inflation comes down.

In our core and core plus bond portfolios, we are positioning to help protect against the impact of higher interest rates through duration and yield curve positioning, as well as owning Treasury Inflation Protected Securities (TIPS) as valuations still offer upside potential.

A market correction may not be lasting

Although any period of monetary tightening can generate higher market volatility, U.S. equities could remain supported by earnings growth. And while valuations are high relative to history, they are not exorbitant considering current and projected levels of interest rates.

I believe that S&P 500 earnings can grow 8% to 10% in 2022, which is still a respectable rate considering the strong rebound in corporate earnings last year. In addition, while inflation is certainly a concern for overall economic conditions, it can be beneficial for earnings growth.

Recent data would seem to indicate that inflation may persist for longer than expected and the Fed could be forced into a more aggressive tightening cycle than previously anticipated. While history suggests that tighter monetary policy and higher rates almost always put downward pressure on equity valuations, what this means for market levels depends on earnings growth and how much it can offset a contraction in price-to-earnings (P/E) multiples.

In fact, perhaps contrary to conventional wisdom, the market has tended to rise in periods following initial increases in the federal funds rate. The exceptions to this are the inflationary periods of the 1970s and early 1980s, in addition to periods when the S&P 500 P/E ratio was more than 20 times earnings at the time of the initial tightening — periods which, of course, have some similarity to today.

However, inflation then was significantly worse and accompanied by a deep recession. In addition, interest rates in prior periods of high valuation were substantially higher. While this is no guarantee that the equity market won't decline when the Fed tightens, it does provide a bit more support than was evident during some of those historical episodes. 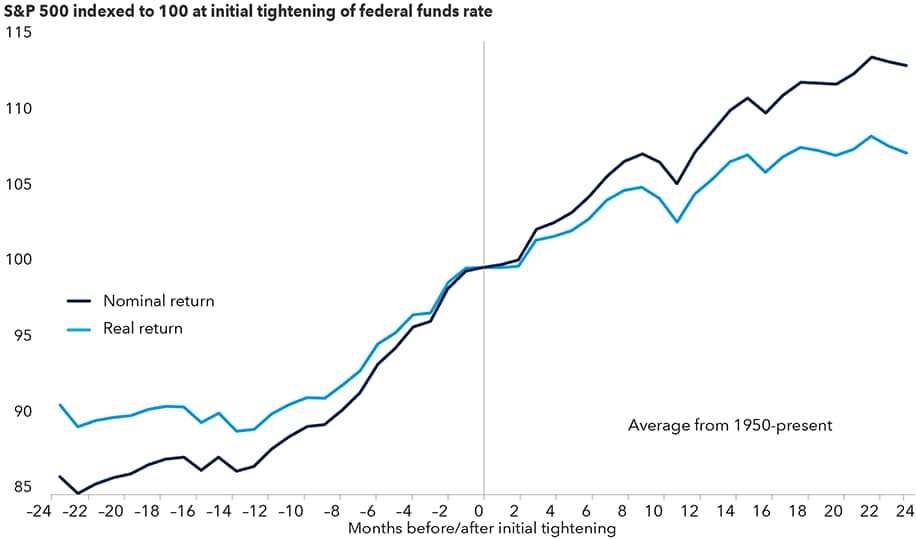 My base case scenario is for U.S. GDP to grow 2% to 3% in 2022 as fiscal stimulus wanes and monetary policy tightens. This slower — but still positive — economic growth should support an increase in corporate profits.

While we are not likely to see the outsized gains of 2021, single-digit equity returns still seem attainable as the market rises in line with, or slightly less than, earnings growth this year. They are likely to be accompanied by more volatility, and we are starting to see that in markets. And while a correction is never out of the realm of possibility in any given year or economic environment, we do not expect a systemic market decline given current economic conditions, earnings strength and level of interest rates.