Is Build Back Better dead?

Is Build Back Better dead?

"Despite harsh words exchanged on BBB earlier this week, it seems unlikely that it is completely dead, and likely that in early 2022 the Democrats could arrive at a compromise to implement some degree of fiscal spending and tax reform." - Meera Pandit, Global Market Strategist

This week, hopes of passing the Build Back Better (BBB) Act, the climate and social spending package, were dashed when Senator Joe Manchin of West Virginia said he would not vote for it due to concerns over further stoking inflation and increasing the national debt. Although BBB might be dead in its current form, Senator Manchin proposed his own $1.8 trillion version to the Administration, which still contains funding for universal pre-K, climate measures, and health care enhancements. However, several key elements would be altered, most notably:

These changes could pose headwinds to economic growth. The enhanced child tax credit, implemented as part of the American Rescue Plan, supported consumption, particularly from low income families with higher propensities to spend. More broadly, even though BBB was intended to be deployed over several years, less spending next year in the event that a new version does not pass would exacerbate the fiscal cliff looming. The budget deficit as a share of GDP in 2020 was -14.9%, followed by -12.4% in 2021. The estimate for 2022 from the Congressional Budget Office falls to -4.7%. While this is an improvement in federal finances, these deficits financed the fiscal spending that supported growth during this period. The projected drop in spending serves as a drag on future growth. Yet, a healthy consumer, strong corporate profits, and an inventory rebuild should cushion the cliff effects to some extent.

One upshot would be that tax reform would be tossed out with fiscal spending as well, which would be a tailwind for earnings for large corporations. It would help the wealthiest households, although would hurt those that could have benefited from an increased SALT deduction included in BBB. However, Senator Manchin did not appear to be against tax reform, and in fact noted he was eager to implement it and roll back provisions from the 2017 Tax Cut and Jobs Act.

Despite harsh words exchanged on BBB earlier this week, it seems unlikely that it is completely dead, and likely that in early 2022 the Democrats could arrive at a compromise to implement some degree of fiscal spending and tax reform. 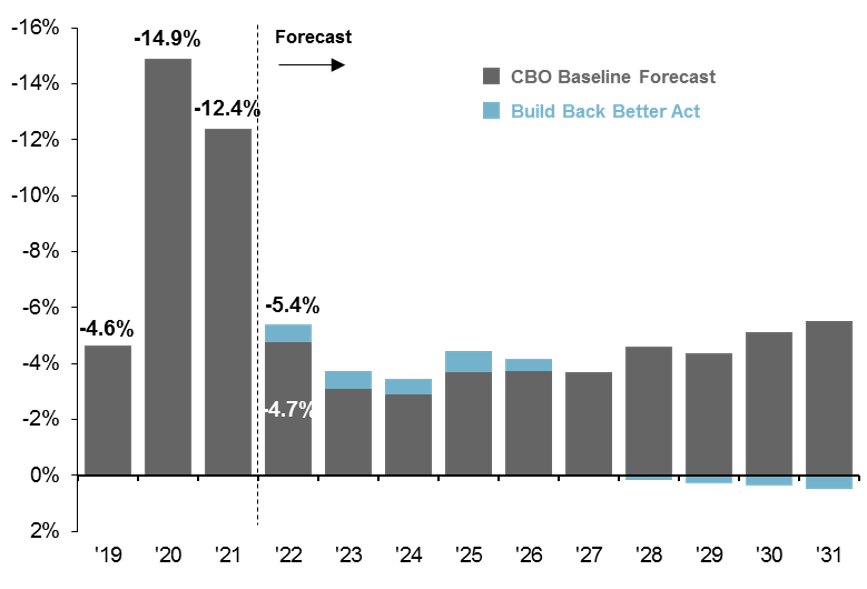