Investment Impacts of the War in Ukraine

The conflict also carries wide-ranging geopolitical implications for the future of European cooperation, the changing posture of U.S. foreign policy toward Russia and China, and the reversal of globalization trends that have transformed the world since the end of the Cold War.

What follows are a range of views from across Capital Group’s investment team of political analysts, economists, and equity and fixed income portfolio managers and analysts.

The West is united

The transatlantic alliance has not been this united since the aftermath of 9/11. It’s quite remarkable how quickly, after years of skepticism and finger-pointing — whether it was over NATO funding, the imposition of sanctions after Russia began the Ukraine war back in 2014, Brexit or the Trump administration’s America First agenda — Europe and the United States have come together in response to Russian President Vladimir Putin’s unprovoked war in Europe.

For more than two decades, the U.S. has unsuccessfully urged Germany to ramp up its defense budget, kill the Nord Stream 2 pipeline and reduce its energy dependence on Russian gas. Yet, within 72 hours of Russia commencing its invasion of Ukraine, German Chancellor Olaf Scholz signaled a radical shift in multiple sacred pillars of German foreign policy: Defense spending will quickly exceed 2% of German GDP, including an immediate €100 billion infusion; German-made weapons can now be sent to Ukraine; and Nord Stream 2 has been halted.

Historically neutral Switzerland has stunningly agreed to adopt all European Union (EU) sanctions against Russia, including freezing Russian funds in Swiss banks. Even traditional supporters of Russia, such as Miloš Zeman, president of the Czech Republic, have condemned the attack and called for harsh sanctions.

International sanctions are mounting against Russia 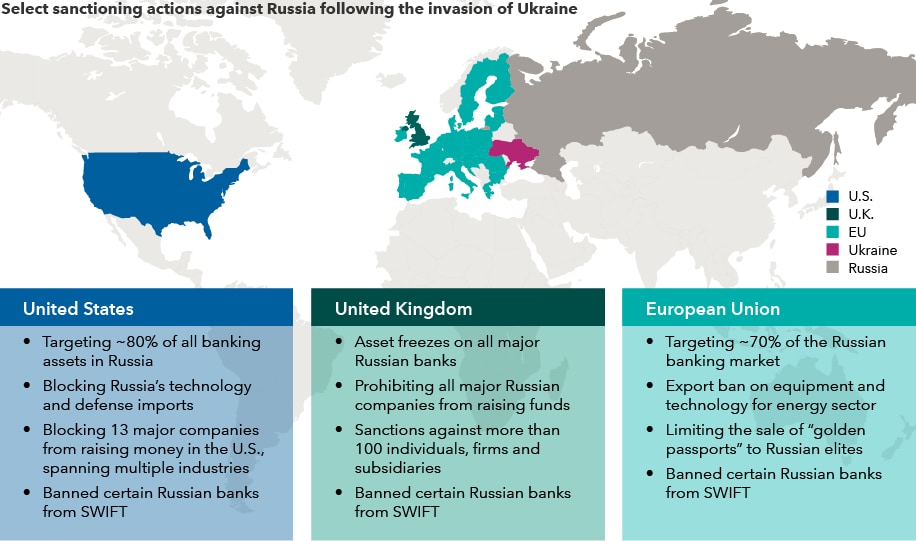 Sources: Capital Group, Council of the European Union, U.K. Foreign, Commonwealth and Development Office, U.S. Department of the Treasury, U.S. State Department. As of March 7, 2022. Note: SWIFT is the Society for Worldwide Interbank Financial Telecommunication, which runs a messaging and payment system used by more than 11,000 financial institutions. Golden passports refer to residence permits that can be made available to foreign nationals and their immediate family via certain citizenship-by-investment programs.

We should anticipate significant Russian retaliation for these unprecedented sanctions. This could include severely reducing or even cutting off oil and gas exports to sanctioning nations, as well as restricting exports of titanium and other critical metals. While curtailing oil and gas sales to sanctioning nations would deprive Russia of needed revenue, China would presumably fill some of that gap — at fire sale prices. Moreover, Putin has used the time since the imposition of Western sanctions in response to his 2014 annexation of Crimea to build up Russian cash reserves and enhance Russian resilience.

Furthermore, we should prepare for the possibility of major cyberattacks on European and U.S. communications, energy and financial systems.
The Germans are preparing for a reduction of Russian gas exports, making plans to backfill with imports of liquid natural gas (LNG). This will be complicated by Germany’s failure over the past several years to complete construction of regasification facilities at its North Sea ports. There is little doubt that energy costs in Europe are likely to skyrocket, which are expected to be inflationary and dampen growth.
All that said, Putin clearly miscalculated on two fronts. First, the fact that the West would come together as quickly as it did, despite European reliance on Russian energy, the newly elected government in Germany, and potentially distracting domestic challenges faced by President Biden, Prime Minister Boris Johnson and French President Emmanuel Macron.

Second, Putin miscalculated the intensity of Ukrainian resistance from both the military and civilians.

Notwithstanding all that, sadly, in the end, I think we could end up with an ugly “peace,” with Russia expanding its control over eastern Ukraine after having severely damaged the country’s national infrastructure. It is hard to see how Putin backs down at this point, absent massive domestic opposition within Russia. I expect this war will get worse before it gets better.

Pandemic, inflation, war: It’s been a tough start to the year

This week, the U.S. announced expanded economic sanctions against Russia, banning imports of oil and gas, and the U.K. quickly followed suit, banning Russian oil. But the EU, which counts on Russia for a significantly larger portion of its energy supply, has not moved as forcefully, vowing only to cut its gas imports by two thirds within a year.

A full energy embargo on Russia would be extremely painful for the major European economies, especially Germany and Italy and smaller countries in central and eastern Europe that depend on Russian gas imports. In the short term, the EU should be able to cope with offsetting imports of LNG. But the bigger challenge will come during the summer when gas is being stockpiled for winter. Higher prices will make it even harder.

Analysis by the European Central Bank (ECB) and others show that a significant reduction in gas supply would have substantial negative effects on the euro zone’s GDP. For instance, the ECB estimates a 10% reduction would reduce euro zone GDP by around three quarters of a percentage point. Given that Russian imports account for around 40% of EU gas supply, an energy embargo could depress GDP by 3% to 4% relative to the pre-war baseline.

Unsurprisingly, the EU is wary of implementing sanctions that could have such a damaging impact on its economy. But if the recent spike in oil and gas prices continues or is protracted, the European economy will suffer negative supply shock even if there is no embargo. Alongside steep energy prices, we are seeing higher prices for other commodities related to the global food supply chain. Prices are also rising sharply for fertilizer and building materials. At the same time, in the absence of an embargo, higher energy prices will boost Russia’s export earnings, mitigating the effects of the economic and financial sanctions.

In the light of extreme uncertainty, I expect the ECB to avoid giving a clear signal that it will end its asset purchases. It will also have to closely monitor the inflationary shock this conflict brings. There is a growing risk of stagflation in Europe. Central banks would want to monitor any signs of inflation expectations so they don’t fall behind. I think they will continue to signal a removal of monetary accommodation, but at a much more cautious pace.

Gas is more challenging than oil for Europe’s economy

There’s an important distinction between oil and gas that seems likely to impact Europe and could ripple through the global economy, given the region’s standing as a major manufacturing and industrial base for automobiles, airplanes and chemicals. Oil is easier to supply and ship around the world when regions experience supply disruptions. Natural gas, on the other hand, is much less fungible. It is far more difficult to transport, whether through pipelines or LNG liquefaction infrastructure. So, if Russian supply is curtailed and Europe faces major shortages, it would be challenging to secure replacement supplies. This would certainly be a blow to Germany, which is a large user of gas for power generation.

In the commodities market, oil and gas prices have reacted very differently. While oil prices usually dominate headlines, the spike in gas prices has been more staggering. For example, European natural gas prices recently skyrocketed, trading at the equivalent of about $100 per million cubic feet of gas. That’s roughly equivalent to $600 for a barrel of oil. This underscores the disparity in how these commodities are transported around the world.

I expect CEOs of oil companies and others in the industry to play a role in alleviating this crisis. In the U.S., I anticipate production to grow to 500,000 to one million barrels a day. Trading prices have recently climbed to nearly $140 a barrel. I don’t think oil producers want prices at this level because it creates volatility and destroys demand. In my view, most oil stocks are priced for the commodity to trade in the range of $60 to $70 a barrel.

I do not expect this to significantly derail the world’s shift to green energy, but I do think it shows how the policy lines around energy security and sustainability could change, especially in Europe. Going forward, I expect policymakers will put a much greater emphasis on balancing the environmental side of things with the social ramifications of what could happen if they do not shore up energy security and insure they have the right supplies from the right partners.

Prior to the invasion of Ukraine, equity markets had been signaling to oil companies a preference for dividends and buybacks and less investment in pumping oil — partly because many such projects over the past decade had poor returns on capital. Oil companies have ample cash flow, and if capital expenditures are increased, they should have sufficient funds to provide both dividends and share buybacks.

Exposure to Russia looms large for Europe, less so for the world

Invasion of Ukraine could mark turning point for cybersecurity

As the war in Ukraine unfolds, cyberwarfare is likely to play a role. I suspect we will be confronted with some incredibly ugly realities. My initial assessment is that this will support increased cybersecurity spending in the near term, but it will more likely be a meaningful inflection point for the industry. The Overton window — the range of policies politically acceptable to the mainstream population at a given time — around cyberwarfare as a tool in international relations could open wide and expose incredible weaknesses in U.S. and EU security.

Most U.S. critical infrastructure assets fail even basic cybersecurity protocols and penetration testing. I feel reasonably good about the U.S.’s large financial institutions’ security and the tech companies, but that’s about it. Energy and utility companies in both the U.S. and Europe have substantially underinvested in cybersecurity — and many remain vulnerable.

Against this backdrop I think cybersecurity investments have strong potential for two reasons: 1) the spending outlook and 2) the fundamental change in industry structure that allows for platform formation and hence more sustainable growth.

In the short term, I think accelerating cybersecurity budgets among corporations, as well as federal and state governments, is a near certainty. And if the situation in Ukraine escalates, I think there is a chance for more pronounced long-term changes.

The single biggest change could be a substantially different regulatory environment. Federal and state laws could become extremely prescriptive about minimum cybersecurity standards, especially in industries relevant to national security or those that impact the public. We could see an enormous investment cycle, specifically in the energy and utility sectors. We could see a massive cybersecurity investment cycle and possibly an acceleration in cloud migrations in Europe as well.

The U.S. defense budget growth drives U.S. defense stock prices. In addition to better fundamentals ahead, defense stocks are still cheap — and consensus estimates could be too low. My belief is that these events will be significantly more impactful for European defense than for the U.S., but I can still pencil out double-digit base case returns for the entire defense group from current levels.

The setup today is supportive of this sector given the full-scale invasion of Ukraine coupled with the reaction from Germany, which announced it is substantially increasing defense spending. EU countries are taking Russia’s actions seriously. It is not clear how the U.S. government will react as it relates to defense spending, but I think it’s reasonable that we could see 4% to 5% growth from current levels, given the need to modernize the force and compete with Russia and China. U.S. defense spending as a percentage of GDP, currently 3.2%, is near an all-time low versus the 4% to 5% we have seen during periods of heightened threat levels or war, leaving a lot of headroom for budget growth in the U.S.