Cycle uncertainty: How is the Russian Invasion Impacting the Economic Cycle?

First and foremost, the invasion of Ukraine is a humanitarian tragedy. But its implications certainly spread beyond the region. The main cycle risks for the global economy center on:

The risk of a high-impact tail event rises, if one of the following events occur:

How is the Ukraine crisis impacting the economic cycle?

The most likely outcome is that the war has a negative impact on growth this year, with a weak first half of the year followed by a rebound in the second half. This assumes that hostilities ease by mid-year, Russian energy supply is maintained, oil prices return to around US $100 a barrel (bbl) and European natural gas prices return to around €100 per megawatt hour. The risk, however, is that energy prices remain high for longer, particularly if the West imposes sanctions on Russian energy exports. This would make the growth impact larger. The prospects for offsetting monetary and fiscal stimulus are limited. At best, the downside growth risks will make central banks more cautious and limit the extent of rate rises. Central banks will be concerned about the impact of energy and commodity prices on inflation and will want to ensure that longer-term inflation expectations are anchored. Europe may undertake some additional fiscal stimulus, but this will be modest.

The global economy was on track for strongly above-trend growth in 2022. Before the invasion, the consensus view was that the U.S. would grow by around 3.5% this year, Europe 4.0%, and the UK 4.5%. Table 1 shows the impact of a US $10/bbl oil price increases on GDP (gross domestic product) and the consumer price index (CPI). A sustained US $50/bbl increase would reduce U.S. GDP by 0.5% and eurozone GDP by 2.0%. We can put the UK midway between the U.S. and Europe. This would take 2022 GDP growth to 3.0% for the U.S., 2.5% for Europe and 3.5% for the UK. This still represents above-trend growth and the forecast assumes a growth rebound in the second half of the year as energy prices decline. These seem reasonable starting point forecast downgrades for the impact of the conflict.

Table 1: Oil price impact on GDP & CPI
Impact of US $10/bbl increase in the price of oil on 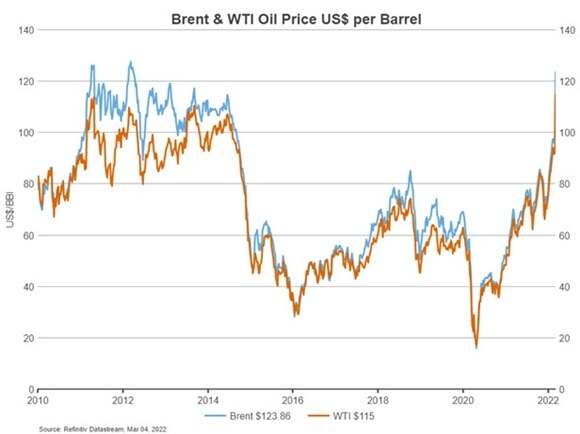 A risk to the scenario of a relatively short-lived shock to the global economy is that energy prices remain high. Most forecasters, however, assume that the potential loss of Russia’s full 4.3 million barrels per day (bpd) of oil exports can be at least partly offset by a deal with Iran that allows nearly 1 million bpd to return to the market, increased production by OPEC of around 1.5 million bpd and the release of strategic reserves by the U.S. and Europe that can add close to another two million barrels per day over a full year.

Europe faces an additional downside risk from its dependence on Russian natural gas. Over 40% of EU (European Union) natural gas and 20% of EU oil originate in Russia. So far, it appears that natural gas supplies from Russia have not been disrupted, with Reuters reporting that Gazprom has maintained gas supplies to Europe via the Ukraine pipeline. Europe’s ability to quickly switch to other sources of supply is limited if sanctions are imposed (which European leaders so far oppose) or Russia cuts supply. It’s fortunate that the crisis is unfolding in March, near the start of the northern spring, rather than in October and heading into winter. A short-lived shock to energy prices should see the European economy recover in the second half of the year. COVID-19 infections are falling, post-pandemic reopening is underway and fiscal policy is supportive because of the recovery fund. The conflict means fiscal policy is likely to become slightly more supportive. Germany has committed to boost defense spending to more than 2% of GDP, and the crisis supports the calls by French President Emmanuel Macron and Italian Prime Minister Mario Draghi for less restrictive fiscal rules in Europe. 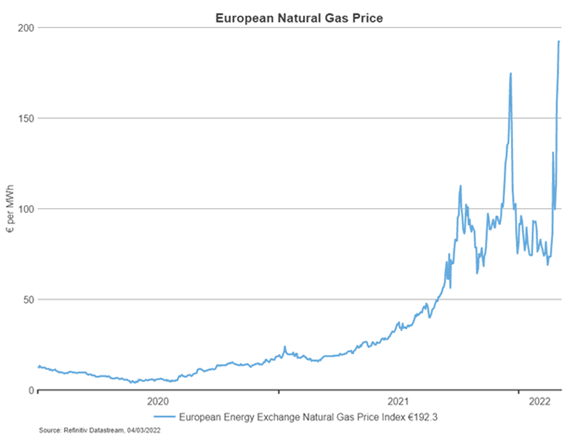 Before the invasion, interest rate markets were forecasting six-to-seven Fed hikes in 2022, one-to-two ECB (European Central Bank) hikes and five-to-six BoE (Bank of England) tightenings. Expectations have been pared back slightly for the Fed and ECB since the invasion, with markets now pricing five-to-six Fed moves, a 50% probability of one ECB hike and five further BoE hikes. Supply-side inflation shocks are a challenge for central banks as they are forced to choose between leaning against inflation pressures and supporting growth. The U.S. economy is the closest to full capacity and the Ukraine invasion is unlikely to significantly change the Fed’s policy outlook. Geopolitical events will make the Fed more cautious and a 50-basis point (bps) tightening at the March 15-16 FOMC (Federal Open Market Committee) meeting seems unlikely. We still expect U.S. core inflation pressures to subside in the second half of the year and think that markets are overaggressive in their Fed rate expectations. Three to four FOMC rate hikes seems a more realistic outcome.

The eurozone economy is further from full capacity than the U.S., allowing the ECB to maintain a more dovish tone. Market expectations for policy to remain on hold seem appropriate.

Labor market conditions are tighter in the UK than Europe (in part due to Brexit) and energy prices are threatening to keep headline inflation above 6% by the end of the year. Household disposable incomes, however, are set to be depressed in April by the 1.25% increase in the national insurance levy and the 54% increase in the energy price cap on the bills households pay to gas and electricity providers. This will be compounded by BoE rate hikes (most mortgages are linked to the base rate) and a likely further increase in the energy price cap in October. The BoE is unlikely to tighten as much as the market expects.

Combined, Russia and Ukraine account for only around 2% of global GDP. The commodity market linkages, however, are more important. Russia is a major global supplier of palladium and a large source of platinum. Both are essential for the manufacture of motor vehicle catalytic converters. This could delay the recovery in global automobile production and prevent prices from declining. Ukraine provides around 50% of the world’s neon gas and 40% of the world’s supply of krypton gas. Both are used in the production of semiconductors and could trigger a renewed blockage in production, which has only recently begun to recover from the pandemic.

Russia and Ukraine account for 14% of global wheat and corn production and prices are surging. Much of this supply goes to emerging markets in the Middle East and Africa. 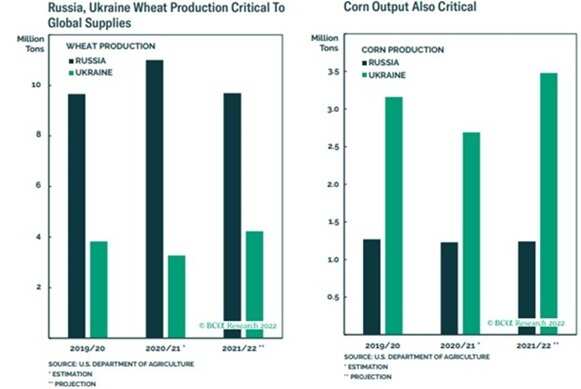 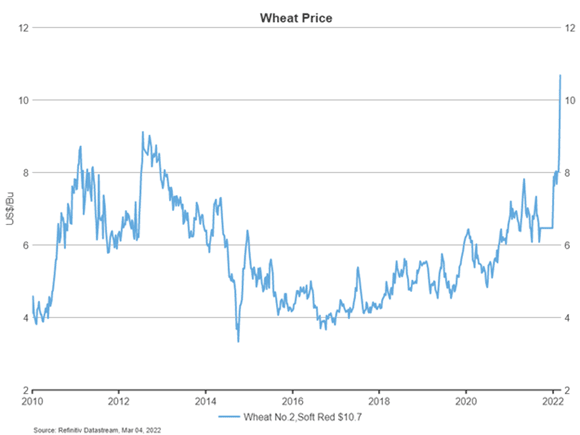 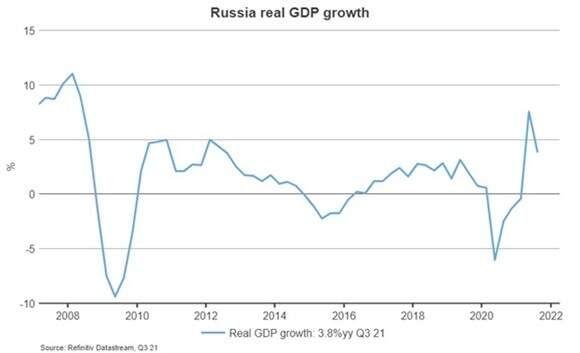 Our sentiment index, as of market close on March 4, continues to hover around deeply oversold levels. It has not yet reached the back-tested levels that support a stage-one risk-on recommendation. The impact on markets over the past two weeks has been concentrated in European and emerging market equities. The uncertainty around the cycle outlook means we are placing a high hurdle on the sentiment indicator as a trigger for a risk-on call.

The war in Ukraine will likely have a negative impact on growth and cause higher inflation this year, with Europe taking the biggest hit. We believe growth should recover in the second half of the year. This depends on oil prices declining later in the year as supply increases, and Europe maintaining access to Russian natural gas exports. There are downside risks to this central scenario and some low-probability-but-high-impact tail scenarios. Sentiment is becoming more oversold, but cycle uncertainty places a high threshold on a risk-on call.

As always, we continue to take a holistic dynamic approach to our clients’ portfolios and will work equally hard to keep them informed on global market events and their impacts on our views.